Business and Health Care Agreements and Structuring including Agreements

Importantly, almost all financial relationships must be compliant with a multitude of regulatory laws, including the Stark self-referral laws, the Federal Anti-Kickback Statute, and their state counterparts, including some state’s fee splitting prohibitions. We routinely structure contracts and other financial arrangements to ensure compliance with these various regulatory laws to help hospitals, physicians and other health care providers meet their business objectives.

In the United States, the question whether any compensation plan is qualified or non-qualified is primarily a question of taxation under the Internal Revenue Code (IRC). Any business prefers to deduct its expenses from its income, which will reduce the income subject to taxation. Expenses which are deductible (“qualified”) have satisfied tests required by the IRC. Expenses which do not satisfy those tests (“non-qualified”) are not deductible; even though the business has incurred the expense, the amount of that expenditure remains as part of taxable income. In most situations, any business will attempt to satisfy the requirements so that its expenditures are deductible business expenses.

An operating agreement is an agreement among limited liability company (“LLC”) Members governing the LLC’s business, and Member’s financial and managerial rights and duties.[1] Many states in the United States require an LLC to have an Operating Agreement. LLCs operating without an Operating Agreement are governed by the State’s default rules contained in the relevant statute and developed through state court decisions. An Operating Agreement is similar in function to corporate by-laws, or analogous to a partnership agreement in multi member LLC’s. In single member LLCs, an operating agreement is a declaration of the structure that the member has chosen for the company and sometimes used to prove in court that the LLC structure is separate from that of the individual owner and thus necessary so that the owner has documentation to prove that he or she is indeed separate from the entity itself.

Limited Liability Companies are very flexible in nature and the operating agreement defines each member or manager’s rights, powers and entitlements. This includes capital accounts, membership interest, distributions of profit and allocated tax responsibility, just to name a few. This internal document is an agreement set by the company members that contains provisions for critical items and rules that run the company. Operating agreements can be amended at any time by the company members or managers.

Mergers and acquisitions (M&A) are both aspects of strategic management, corporate finance and management dealing with the buying, selling, dividing and combining of different companies and similar entities that can help an enterprise grow rapidly in its sector or location of origin, or a new field or new location, without creating a subsidiary, other child entity or using a joint venture.

The distinction between a “merger” and an “acquisition” has become increasingly blurred in various respects (particularly in terms of the ultimate economic outcome), although it has not completely disappeared in all situations. From a legal point of view, a merger is a legal consolidation of two companies into one entity, whereas an acquisition occurs when one company takes over another and completely establishes itself as the new owner (in which case the target company still exists as an independent legal entity controlled by the acquirer). Either structure can result in the economic and financial consolidation of the two entities. In practice, a deal that is an acquisition for legal purposes may be euphemistically called a “merger of equals” if both CEOs agree that joining together is in the best interest of both of their companies, while when the deal is unfriendly (that is, when the target company does not want to be purchased) it is almost always regarded as an “acquisition”.

Asset protection consists of methods available to protect assets from liabilities arising elsewhere. It should not be confused with limiting liability, which concerns the ability to stop or constrain liability to the asset or activity from which it arises.[2] Assets that are shielded from creditors by law are few (common examples include some home equity, certain retirement plans and interests in LLCs and limited partnerships (and even these are not always unreachable)). Assets that are almost always unreachable are those to which one does not hold legal title. In many cases it is possible to vest legal title to personal assets in a trust, an agent or a nominee, while retaining all the control of the assets. The goal of asset protection is similar to bankruptcy, and the two practice areas go hand-in-hand. When a debtor has none to few assets, the bankruptcy route is preferable. When the debtor has significant assets, asset protection may be the solution.

Our lawyers have many years of experience in sophisticated tax planning matters and in dealing with tax controversies before federal and state authorities. Our lawyers regularly assist individuals and businesses, both domestic and foreign, in devising and implementing tax plans for their U.S. and foreign investments that minimize taxes while meeting the client’s commercial and personal objectives. We also advise clients in connection with pre-immigration planning and international tax compliance matters. Our lawyers represent clients in tax disputes from initial civil examination and criminal investigation, to administrative appeals and trial. 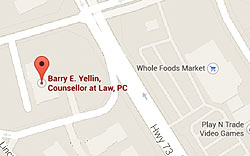